I’m very far behind in this, I’ve got to admit I’m busier than last year and haven’t coped with it completely yet. Luckily we’re progressing slowly in order to understand better and that gives me the opportunity to merge together the blog posts for meetings 2 & 3.

As I said in the previous post, the goal for now is to understand the proof of

boundedness of Carleson’s operator (through time freq. analysis). As an introduction to the real thing we’ve started from the simpler case of the Walsh transform, or Walsh series, or Walsh phase plane, whatever you want to call it. It’s easier because all the nasty technicalities disappear but the ideas needed are already in there, that’s why it propaedeutic. We’re following Hytönen’s notes as suggested by Tuomas (you can find them here: http://wiki.helsinki.fi/pages/viewpage.action?pageId=79564963). An alternative is Tao’s lecture notes (lecture 5 in particular) for course Math254A W’ 01 (http://www.math.ucla.edu/~tao/254a.1.01w/) which are quite nice – as all of his stuff. The main differences are in that Hytönen proves every single statement, and he deals with the Walsh series (analogue of the Fourier series) while Tao deals with the Walsh transform (analogue of the Fourier transform). Also, Hytönen then goes on to prove the full euclidean case, while Tao doesn’t.

The Walsh operators are best described as operators on the real line with a different field structure. One works on

, i.e. the Laurent series with coefficient in

, which can be identified with the (binary expression of) positive reals by

Notice there’s only a finite number of terms with positive degree, and the characteristic of the field is 2. We have some issues with reals that end in an infinite series of

, but we can ignore them as their measure is zero. Addition

are the same as those for Laurent series; in the real representation the operations correspond to those of

except you never carry a digit. This modification of the field operations has the effect of isolating dyadic intervals somehow. To see why, consider the natural distance

is the same as

are at a distance of

(no matter how many

‘s I attach to the end of the first one).

The Pontryagin dual (or characters) of the additive group of

itself, and it can be seen as follows: take

to be the square wave of period

is a character for every

, as can be easily verified. On the other hand, we can show that these are all the characters. Consider

These numbers are in

. Then if you define the element

and it is such that

Now, we’re interested in Walsh series, i.e. only to functions that are periodic of period

. In the real case those are functions on the quotient

, so in this case we consider functions on the quotient

equivalently, we’ll consider functions on the elements of the kind

, extended by periodicity. What’s different in this scenario, w.r.t. the euclidean case, is that the last quotient is also a (closed) subgroup of the big group

. In order to determine the characters of this group, which we name

, we can appeal to Pontryagin’s theory (since

is abelian and locally compact), and we’ll have that

is the annihilator of

is: it’s isomorphic to

In other words, the characters of

is a polynomial (notice how this is in perfect analogy with the euclidean case).

Having sorted this out we proceed on to the Walsh-series. Since we can write any natural number

with a finite number of

, we have a bijection between

. We identify the two sets under this bijection and write

with the obvious meaning, so that we can write the

These are known as Walsh functions. It is immediate from this to see that if

have complementary digits up to the leftmost one (i.e. if the

and therefore in this case

Using the algebraic properties of

accepting the convention that

. Now, if we look back at the definition,

otherwise. This means it is just the square wave rescaled by a factor

, and we can write this in a more usual way by saying that

is the Haar function or square wave of period

set theoretically one can write

Of course one could say I’ making way too many identifications, but my point was exactly to see all these definitions as a unique one.

Anyway, what are these functions like? From this last equivalent definition it’s immediate to see that

is constant on dyadic intervals of length

is the smallest integer such that

and on every dyadic interval of size

(rescaled to fit in there). Thus every

can be obtained by flipping (i.e. inverting the sign of) the values of

on a dyadic interval of length

. This way we obtain

functions though, while we only need

. Those additional functions will turn out to be in the linear span of the

It’s best if I show a picture of what they look like (I’ve used Mathematica to plot them): the following are the first 9 Walsh functions

As you see, not all the patterns show up. At the following link you can find a further picture of the first 32: http://imgur.com/6hSQIJN

From the Walsh functions, as they are the characters of the group, we can define the Walsh-Fourier transform on

is the (pull-back of) the Lebesgue measure. For

the Walsh-Fourier transform is the more general expression

It’s not at all hard to prove that the Walsh functions are orthogonal to each other (I won’t repeat it here since it’s in the notes linked above). As in previous post then we want to consider approximations to functions

these are the Walsh series. We are interested in proving they are a.e. convergent if

. As seen in the previous post, one can do so by proving the

boundedness of the operator

This is what the notes are about, and the way this is done is by time-frequency analysis on the Walsh plane. I will come to this later.

(I’ve got the feeling that category theory might make the following less fuzzy, but I’m not really into that kind of perversion). The idea is that the Walsh-Fourier transform on the full group is kind of a limit of the discrete Fourier transforms on the subgroups.

First of all we consider the characters of

: it’s a finite abelian group and therefore they are isomorphic to the group itself; moreover, they are given by products of characters of

(this is the isomorphism, actually). Since

is (isomorphic to) a subgroup of

– a closed one indeed, since it’s a finite union of points – we can also use Pontryagin results as before, so that

is the annihilator of

, i.e. the polynomials with monomials of degree at least

. Thus the characters can also be written as

. Now, these are the Walsh functions up to index

, which are constant on dyadic intervals of length

, and can thus be specified by a sequence in

. So, the Walsh functions of index

, as sequences, are the characters of

‘s above: they are ordered by the correspondence

is the character number

in base 10. As a member of the Walsh functions its index is 6 though. Let me explain why.

in base 2 by its digits as

(where there can be an arbitrary number of zero digits on the left). Then

(assume it is right continuous on the jump discontinuities, so that

then the corresponding factor is just

which as a character of

is associated to index

– the number whose digits are the binary digits of

in reversed order. Thus the orders of the Walsh functions and the characters differ by a reflection transformation in the binary digits, which we denote as

, be careful). Thinking of

as a polynomial in

this transformation is obtained by multiplying by

. As an example, the characters of

are ordered as follows:

. They can be specified by

values, and we can define their Fourier transform as

Since it’s a linear transformation we could also write it in matrix form. For example, in

the matrix of the (Walsh-)Fourier transform would be

it would instead be (let me write only 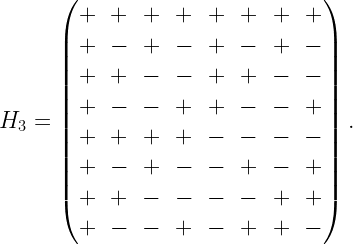 You might have already spotted what’s going on. These are the Walsh-Hadamard matrices, that are obtained by the recursive formula

Why is this so? if you think of

then the characters are

and if you write

(binary expression) this is just

and the matrix entries are thus determined by the values

corresponds to the rows

matrix of the Fourier transform on

, and it has no effect because

, therefore these rows are just two copies of the matrix

; on the other hand

corresponds to the rows

, thus these rows are a copy of

on the side (this corresponds to

all you have to do is generate the matrix

and sort the rows by the correspondence

Getting back on track, consider

fixed; we want to see how these discrete transforms are related to the transform on the full group

acts on functions from

(for simplicity), thought of as vectors with entries

is associated to the integer

. We want to obtain from that

, and we do so by constructing an approximation of

which is constant on the dyadic intervals of length

for some choice of

will then be our function on

. We identify this from now on with an element of

The criterion for this choice is that

be as close as possible to

norm: by optimizing it’s immediate to see that we have to take

to be the average of

because the Walsh functions are constant on the dyadic intervals

Now this means that

and also the values of

on the dyadic intervals

, as noticed before). Now

is unitary if rescaled and symmetric, and one can compute exactly

which in turn implies

(as vectors of values on the

on the dyadic intervals

with its own average on them, and in particular if

is constant on the

. The convergence we’re looking for can thus be viewed as “taking this property to the limit”, in an informal sense (we want the limit along any sequence and for generic

functions – which are not very well approximated by these functions constant on dyadic intervals).

I haven’t said anything yet about the time frequency in this model: I will address that in the next post of this series, along with some heuristics behind the proof of the the

boundedness of the Carleson operator for Walsh series (this is called Billard’s theorem, it was proved in the very same year Carleson proved his result; I don’t know with which techniques though).