About 2 years ago, Müller Ricci and Wright published a paper that opened a new line of investigation in the field of Fourier restriction: that is, the study of the pointwise meaning of the Fourier restriction operators. Here is an account of a recent contribution to this problem that largely sorts it out.

1. Maximal Fourier Restriction
Recall that, given a smooth submanifold

is defined (initially) for Schwartz functions as

that we can extend

to an operator over the whole of

, by density of the Schwartz functions. However, it is no longer clear what the relationship is between this new operator that has been operator-theoretically extended and the original operator that had a clear pointwise definition. In particular, a non-trivial question to ask is whether for

is the ball of radius

. Observe that the Lebesgue differentiation theorem already tells us that for a.e. element of

in the Lebesgue sense the above holds; but the submanifold

has Lebesgue measure zero, and therefore the differentiation theorem cannot give us any information. In this sense, the question above is about the structure of the set of the Lebesgue points of

and can be reformulated as:

Q: can the complement of the set of Lebesgue points of

contain a copy of the manifold

The natural approach in regard to these questions, as is well known, is to look at the maximal version of the operators in question. In our case, that would be the operator

that is the Hardy-Littlewood maximal function of

restricted to the manifold

. A standard argument shows that an inequality of the form

-a.e. convergence in (1) for functions of

(because it is trivial for the dense class of Schwartz functions). Now, working with

isn’t actually the best because of that absolute value inside the average that is destroying cancellation, so in practice it is best to work instead with the signed maximal averages

this operator does not directly address the question of Lebesgue points (although it gives a convergence result nonetheless), but Müller Ricci and Wright have a clever little argument1 to show that one obtains the Lebesgue points result working with

for at least “half” of the range of exponents

which you get for the signed averages (actually, Ramos has devised a way to go around this and not lose anything, see links below). In general, one can consider many types of maximal averages combined with the Fourier restriction operator.

Anyway, Müller Ricci and Wright proved that in the 2-dimensional case where

is a curve in

, which is the same range in which

is bounded and is optimal (the Fourier restriction conjecture is verified in dimension 2). This is no coincidence of course, since their proof is an adaptation of that of Sjölin for the latter. A few results have followed theirs in the last two years, see for example this by Ramos and this by Kovač and Oliveira e Silva (there should be some work of Fraccaroli & Uraltsev as well but I cannot find it).

However, somewhat recently and somewhat surprisingly, Vjeko Kovač has pretty much killed this line of investigation! Indeed, he has shown that there is a general argument with which one can deduce automatically the inequality

from the corresponding inequality

In the next section we will discuss Kovač’s argument. Some caveats are in order:

In this note, as an exercise for myself, I will illustrate Kovač’s remarkable proof in the slightly simpler case of maximal estimates (instead of the full variation estimates).

The basic idea is to recognise that the lacunary version of the maximal Fourier restriction operator is in some sense a maximal truncation operator – at least for a special kind of averages. The fundamental ingredient in the argument is therefore a (previously unknown, as far as I understand) inequality of Christ-Kiselev type. I have already discussed in the past what we might call “the Christ-Kiselev maximal principle”: it is a general principle that tells us that if we have an

inequality for a linear operator

(that is, in the technical jargon,

-improving), then we can conclude the same inequality for certain maximal truncations of

. In that previous post the operator to which the principle was applied was the Fourier transform and the

, while the associated maximal operator was the maximal truncation

. The proof was based on a shockingly clever idea: partitioning the real line dyadically according to the

mass of the function.
The incarnation of the principle that is needed for Kovač's argument is the following:

be a collection of Schwartz functions with the property that their supports are pairwise disjoint. Then if the inequality

Notice that the constant

produced by the proof blows up as

.
The proof of this Christ-Kiselev type lemma is more straightforward than the other mentioned above and is as follows (apparently the general argument in this form is due to Tao; but Lemma 1 specifically is due to Kovač himself, I think, and was not known before).

that we have to show is finite. It suffices to assume that the index

ranges over the interval

, as long as the resulting constant

does not depend on either

. This will allow us to use induction in the parameter

to prove the lemma.
The base case is

and is completely trivial: it’s just the restriction estimate itself! Now assume therefore that it has been proven for all

be the set of points

is the smallest index for which the supremum

is attained. The sets

are measurable, pairwise disjoint, and they partition

itself. Now look at the term at the right-hand side of (2): there is a smallest index

Notice that the minimality of

have disjoint supports and therefore

.
Now, observe that by our decomposition above we can write the supremum as

and we can split the latter sum into 3 terms:

can be treated similarly by the inductive hypothesis: indeed,

and therefore, by inductive hypothesis and the considerations about

and the same bound holds for

have disjoint supports in

, and therefore we have the stronger fact that

.
The odd term is

, but this term actually is simple to treat: the condition

. This means that we can apply directly the Restriction estimate to this term, and we have

and this is indeed possible, but only thanks to the fact that

, as claimed in the statement of the lemma, and we are done.

The Christ-Kiselev type lemma above is particularly well suited for establishing a lacunary version of the maximal Fourier restriction result we want. There are some constraints such as the functions

being Schwartz, so we proceed with some caution and content ourselves at first with treating only the special kind of average that follows. Let

be a Schwartz function and let

. We will look at averages of the form

the reason for choosing such an expression is easily explained: let

which is precisely the form we want this to have in order to apply the Christ-Kiselev-type lemma (with a little abuse of notation, we are writing

). There is however the support requirement which is very important, and therefore we choose

radial (for convenience) and such that its Fourier transform

is supported in the annulus

. It is then immediate to see that

is supported in the annulus

. These annula are not exactly pairwise disjoint, in that

(and nothing else), but this is easily fixed by restricting the index

to range only over the odd integers and, separately, only on the even integers. An application of Lemma 1 therefore gives us exactly the lacunary maximal Fourier restriction estimate for these special averages:

where we have used the fact that, by the hypothesis on the support of

We are nearly there! A bit like in the proof of Stein’s spherical maximal function theorem which we gave a few days ago, after gaining control of the lacunary supremum it suffices to control the local supremum (when we restrict the parameter to a dyadic interval) to conclude. Indeed, since for any

there exists a unique

The first term on the right-hand side was dealt with just above, so all that remains is to deal with the second term.

As it turns out, this term is very easy to deal with. First of all, consider

fixed and observe that

where the second inequality is by Hölder. Now we take the supremum in

and bound it by the

norm of the last expression is thus bounded by

which by the Restriction inequality is bounded by

), we conclude that the above is bounded by

but now observe that as in (3) above we have

In conclusion, the above discussion has proven

be a Schwartz function such that

and the restriction inequality

Now, this in itself would already be a very nice result on its own, but with a little more effort one can show that the hypotheses on the type of maximal average can actually be widely relaxed. Indeed, the averages we are interested in are of the type

a complex Borel measure, in general; the idea is that if

is sufficiently regular, we can represent averages with respect to

as averages of averages of the type above.
Suppose then for convenience that the function

as in the Proposition above is normalised so that

(this clearly holds for all

denote the Schwartz function whose Fourier transform is

(we are therefore assuming that

exists and is infinitely smooth). Notice that

is supported in the same annulus as

. This definition is chosen exactly in order for the following to hold: 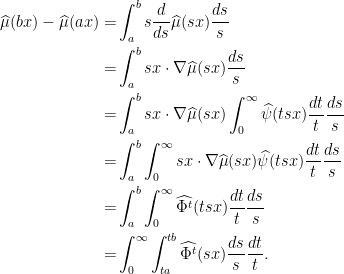 Observe that in the last line we have used Fubini, and to justify this we will have to assume that the integrand is integrable, which in turn must be deduced from properties of

. If the integrand is integrable, we can also take the Fourier transform of

, and see that it equals

and you can recognise in the inner integral an average of the type we studied above; so it is indeed true that, given some regularity of the measure

we can see averages with respect to it as averages of our previous averages. It is an easy exercise to see that all the manipulations above are justified if we assume for example that

– the latter having the effect that

we see by triangle inequality that we can bound

Finally, the integral in

by (4), and this shows Proposition 2 has the corollary

be a complex Borel measure such that

and the restriction inequality

So, what is left to understand in the field of maximal Fourier restriction? It is fair to say that Kovač’s argument provides quite a satisfactory answer to the main question of

-a.e. convergence of (signed) averages of the Fourier transform. What is left out is the following:

Footnotes:
1: The idea is to consider

, which has positive Fourier transform

); after an application of Cauchy-Schwarz, one has

is because the estimate is known to be false when

(see this paper of Beckner, Carbery, Semmes and Soria).